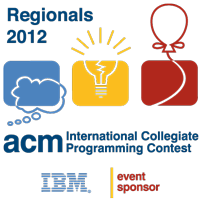 The North Western European Regional Contest (NWERC) is a contest in which teams from universities all over the North-Western part of Europe are served a series of algoritmic problems/puzzles. The goal of each team is to solve as many puzzles as possible within the set time limit. Solutions need to be programmed out on a computer and can be submitted to a semi-automated judging system, after which the solution is checked. The teams that have solved the most puzzles at the end of the contest qualify for the ICPC World Finals.

The ACM ICPC Contest is a multi-tiered competition among teams of students representing institutions of higher education. Teams first compete in regional contests held around the world from September to November each year. The winning team from each regional contest qualifies to advance to the ACM International Collegiate Programming Contest World Finals, typically held the following March to mid-April. Additional high-ranking teams may be invited to the World Finals as wild card teams.

If you want to see an impression of the contest you can visit last years contest websites: